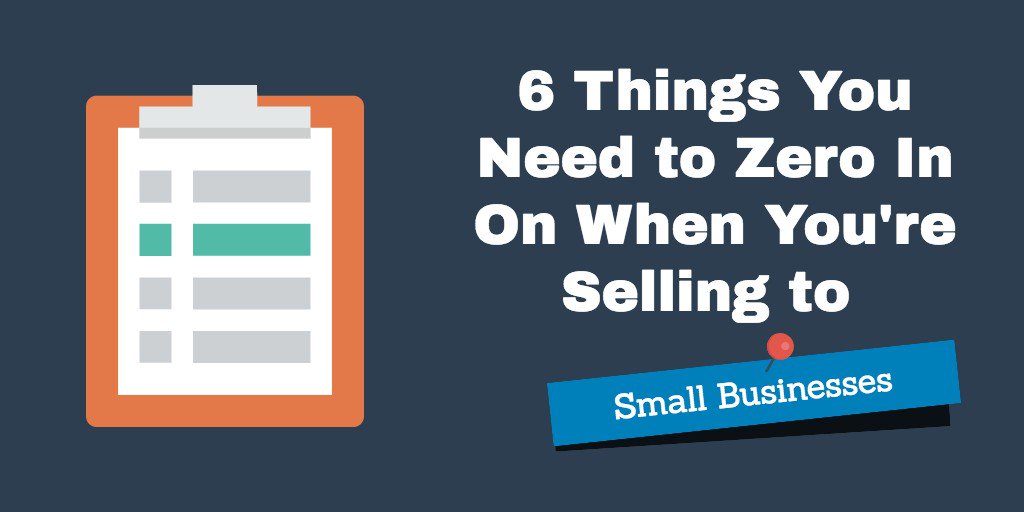 They’re the largest single category of businesses in the USA and one of the most diverse, providing a huge number of jobs in everything from food to tech. That means there’s probably an SMB market for your offering.

Selling to SMBs differs from the enterprise level equivalent though. The biggest mistake sales orgs can make is to see SMBs as ‘little enterprises,’ basically the same thing but smaller. They’re not. The difference between a $3m revenue business and a $300m one is more than zeros in their revenue stream. It’s structure, pain points, approach to strategy and planning, buyer journey, everything.

Here are six things you really need to zoom in on when you’re selling to SMBs.

1: Show Value From The Start

Small businesses are often undercapitalized. That puts them in a tight position: they need to grow to become stable and profitable. But they can’t grow without capital, and to get it they need to grow. Some SMBs are able to attract investment but the majority are essentially built on the founder’s wallet. So they’re keenly aware that growth is necessary, and most would like to make savings, though there’s often not much budget to cut.

All this means that when someone at an SMB picks up the phone, you need to show value from the start of your interactions.

If you have a tool that can deliver more revenue, or faster growth, foreground it – even more than you would for an enterprise client. Sales decisions in SMBs are made fast.

SMBs might have small budgets, but they’re not as price sensitive as people often imagine. What they’re very sensitive to is value: if the benefits stack up. Most SMB founders/CEOs will get their wallet out.

Overpromising is a perennial temptation to sales people. But it’s one of the leading causes of churn in SMB sales1.

Consider delivery as part of sales. Groove’s Len Markidan says that two of the most important moments in a customer lifecycle are when they sign up – and when they ‘experience their first success’ with your product2.

Remember, your SMB clients are an investment. Ticking the box – yes, we sold something, cool – isn’t as important as convincing them that you’re the best and not just adequate. The only way to build a lasting relationship is by delivering! Get it right and when they grow they’ll take you with them.

3: Be the Cavalry, not the Engineers

SMBs have short investment cycles. You need to provide value in an immediate way. This speaks to provisioning but to sales as well. When you’re selling to SMBs you have to show how you can help them – not down the line, or when X, Y and Z conditions are fulfilled, but right now.

Strategic benefits are great, but SMBs have shorter investment cycles. So the time to value of your offering has to sync in with that. If it doesn’t you can still sell to SMBs, but expect it to be a tough negotiation to get a yes from someone who won’t see a benefit for two quarters or more, when they’re running a business that’s less than two years old. If you’re in that situation you might need to offer special financial packages for SMBs that reflect the delayed value of your offering.

The testimonials we have from SMB clients are one of the most powerful pieces of content for attracting more SMB clients. While enterprise level business buyers prefer white papers and case studies, SMB buyers tend to find out about you via search and then learn about you on blogs, forums and through friends and colleagues – again, a process more familiar from B2C than from enterprise B2B selling.

91% customers would give a testimonial if they were asked. But only 11% actually get asked. We should be asking. And we should be making it super easy for customers to deliver testimonials. Once we have them, we should be integrating them into SMB oriented sales materials.

That could start with taking a cue from Desk.com and others who put testimonials front and center on their homepages, but where sales reps would have a fact sheet or white paper ready for enterprise clients, something that accentuated other customer’s experiences more would be more effective for SMB buyers.

5: Growth is a Pain Point

For a lot of SMBs growth is a pain point: it’s not a ‘wouldn’t it be nice,’ it’s a must have. They’re running on loans, or on personal cash. Growth doesn’t mean entering new markets abroad or consolidating their position: it means means achieving stability, profitability, and relief from a pain point that’s personal to the founder/CEO who’s often built the business out his or her own wallet.

That makes growth an ideal selling point. After all for every person who makes a business purchase to gain something (a benefit) there are more than two who buy to lose something (a pain point). So when you’re approaching the business benefits of your offering, you might need to couch them differently to an SMB audience: for enterprises, growth is a strategic good but not a pressing concern, while for early stage SMBs it’s often an urgent problem standing between them and a stable, profitable business.

Positioning yourself as a line item for a company that struggles to pay bills means you’re expendable. And if something has to to in a bad month it will be you. SMBs are often undercapitalized and have limited access to credit, so if they experience a downturn in revenue when margins are already slim, they can and will cut any expense they can to keep the lights on.

Yet, SMBs can be among your most loyal customers, and while some will crash and others will grow to small-town size and stay there, some will grow – and grow. Selling to SMBs can mean a revenue base that grows itself, something you can’t get with enterprise level sales where budget is already set. IBM isn’t going to double in size in a year and switch to a bigger package that bumps your ARR, but a business that’s only two or three years old can do that.

Positioning yourself as a partner means you’re someone they turn to when they’re in trouble, not someone they turn away from. And when their business does grow, you can be ready to step in with more offerings, more help and a deeper connection. You can’t ‘always be helping’ if they won’t tell you what the problem is, and partnership is how you achieve that.

There’s a profitable business opportunity in SMB sales – but you have to approach SMBs the right way. Specific differences in how SMB founders/CEOs often see and operate their businesses, compared with enterprises and consumers, means they have to be approached in specific ways. We need to mirror their processes and speak to their concerns, focussing on relationships, stability and growth, and respecting their ‘chief cook and bottle washer’ multiple role staffing. If we do that, SMBs can become a significant revenue source.