Technology is fun, practical, and makes you efficient. But the thing is, personal information is often leaked (for example, telephone conversations, location, access to bank accounts, hobbies, pets, etc.).

However, for many programs, this information is helpful. It is easier to understand what to show people so they will buy your product. Companies can also benefit from improved workflow and service quality. For example, they can use recording calls to analyze and change their sales or support strategy.

But the protection of human rights and freedoms is above all, and the right to the confidentiality of information is one of them. So how to simultaneously follow the laws and be able to use such an essential tool in your work as call recording?

You may think there are the strictest laws in our country. But this is far from the truth. Nowadays, each modern country has its vision of protecting its citizens’ rights, and you might be surprised how different the laws on recording calls can be.

For example, Australia‘s general rule says that the call may not be recorded. However, there are some specific occasions, but they are strictly limited by law, and the typical company has no opportunity to record them permanently.

In India, the law is unclear. The government allows recording when it is necessary to protect national interests and fight terrorist activities. But call recording is illegal otherwise.

Some countries say ‘Yes’ to phone call recording, but if you inform all parties of the conversation about that. Also, you must state the purpose of the call. Such rules apply in Canada and Germany.

But there are some states where call recording laws are softer. For example, you can record the conversation in Romania, Finland, Poland, and Italy without notifying other parties. These records may also be used as evidence in court.

One thing all countries have in common is that the party making the recording must be a participant in the conversation. Thus, you have no right to record private conversations of other people. Such records will also not be considered in court as evidence. Rather, the opposite. You will be sued for gross violation of the right to privacy.

The situation in the United States of America 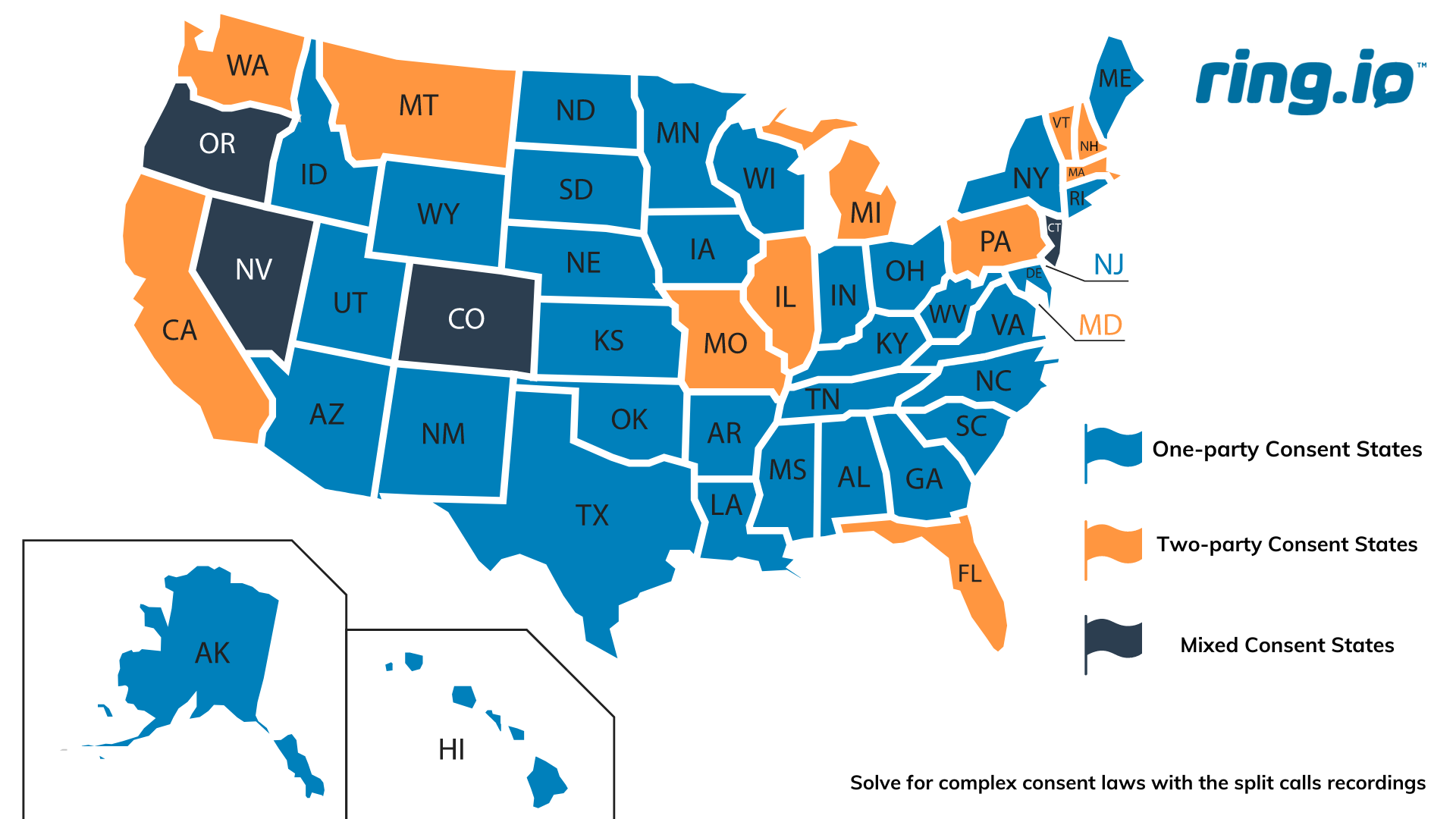 You may face two problems: conflict between federal and state laws and conflicting laws of two states.

In general, Recording Business Telephone Conversations federal law requires notification of at least one party to a conversation (18 U.S. C Section 2511(2)(d)). Thus, if you are the party of the conversation and want to record it, you are allowed to. So, we could say that the USA is a one-party consent state.

But historically, the United States consists of 50 states and the District of Columbia, which have local laws. If you live in a particular state, its laws are more influential than federal ones. It applies to absolutely any area, including call recording compliance.

The next question is: “In what states do you need to ask permission from all parties?”.

Thirteen states in the U.S. require two-party consent (for example, California and Florida). In most states, you need the consent of at least one party (like in Wyoming and Texas).

“However, when you and the person you are recording are both located in the same state, then you can rely on the law of that state,” the Digital Media Law Project says.

The complete list of states and their area codes you may find here.

We’d also like to mention some call recording laws by the state which you should know:

How to record the interstate conversation?

Let’s imagine you need to call someone situated in another state. What law should you follow in this case?

We recommend informing each person you call about recording your talk, whether he is from the two-party consent state or not. It will save you from a lot of possible difficulties. If you want to avoid it in any case, you should know in what state your companion exactly is and follow the laws of that state. Not yours!

What are you risking by violating the call recording law?

If you are caught recording phone calls illegally, the worst thing that could threaten you is criminal prosecution. The most harmless punishment you can face is a fine of $500 or more for violating call recording laws. But the risks are far more considerable for large companies.

For example, the customer service of Wells Fargo didn’t obtain consent from their customers for recording phone calls. As a result, in 2016, the court ordered the company’s owners to pay $8.5 million in damages.

The same situation was with Bank of America, which was forced to pay a $2 million fine for not giving a “clear, conspicuous, and accurate disclosure to consumers about the recording at the beginning of any such communication.”

There are many cases when big companies break this law. This is especially true in California, which is particularly strict about protecting privacy rights. American Airlines, Malaysia Airlines, Czech Airlines, Hunter Boots, Harman Audio, JBL Audio, and British Airways are under investigation because they didn’t follow Californian state law.

Big organizations are risking their money and reputation, which is sure to cause more destructive consequences.

Tips on how to proceed with successful recording phone calls

You may think: “Why so many companies don’t follow phone call recording laws?”.

One of the main reasons is the common opinion that the notification about recording will hurt sales and customer relations. But what if they are wrong?

In 2021, the company TIDAL experimented. They only recorded their managers for three months, so they didn’t have to ask permission from their customers. During that period, the company had 13 928 conversations, of which 208 appointments were made. The conversion rate was 1.4%.

Then, they recorded both parties saying that to the second party. Of the 5 455 calls that took place, 431 meetings were made. The conversion was 7.9%, 464% higher than in the first case. Unexpected data, right?

One theory says the notification seems to be authoritative. It also attracts more attention and makes the person more focused on the conversation. Anyway, you should follow the law, and then you can make your investigation about the influence of the notice about recording on your achievements.

And here are some tips on how you can make the qualitative recording phone call.

How you can use Ring.io in call recording compliance

As we said, you may notify about recording manually, or you can use software and automate this process.

Ring.io has a Call Recording feature that automatically records all your inbound and outbound calls. We are sure you will love using it for effective coaching and analysis. Want to know more? Explore the feature in detail here.

But now, you can also use our 2-Party Consent Calls Recording feature, which allows you to solve the consent problem with one button.

Depending on area codes, the system will choose whether to announce a prospect about recording or not. All you need is to dial the number of someone you want to call.

You can also avoid recording both parties in those states where you should have two-party consent if you don’t want to use notifications as you wish.